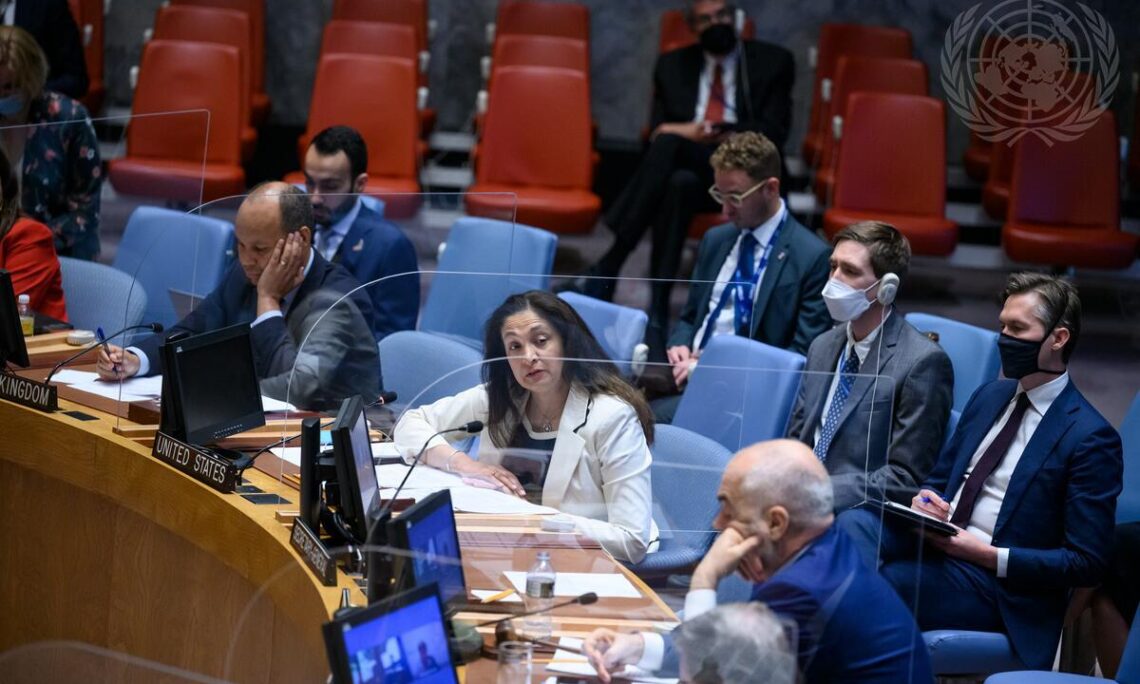 Thank you, Prime Minister Rama, for giving me the floor today. And I’d like to welcome Albania on the start of your Security Council presidency, and thank you, more broadly, for the leadership role that Albania has played in the pursuit of accountability. Let me also join others today in extending our appreciation to President Donoghue, High Commissioner Bachelet, and Professor Akande for your interventions.

I’d also like to express on behalf of the United States my deepest condolences on the passing of Judge Antônio Augusto Conçado Trinidade, who ably served on the International Court of Justice since 2009. He will be dearly missed.

The United States will continue to be a strong supporter of meaningful accountability and justice for the victims of atrocities through appropriate mechanisms. Justice, accountability, and the rule of law are values we share, and which we continue to believe are best advanced together.

Unfortunately, we cannot have a discussion on accountability without acknowledging that it is now nearly 100 days since Russia’s unprovoked attack on Ukraine. In that time, we have witnessed Russian forces bombing maternity hospitals, train stations, apartment buildings and homes, and civilians killed even as they bicycled down a street.

We have received credible reports of Russian forces torturing and committing execution-style killings of people with their hands bound behind their back. We have received reports of women and girls being raped, some publicly, and children taken away to Russia and put up for adoption. And we know that Russian forces continue to deny safe passage to civilians fleeing violence and to humanitarian organizations trying to reach those in need.

Russia also continues to flagrantly disregard the International Court of Justice’s order of March 16, which requires Russia to suspend immediately its military operations in Ukraine.

This type of unprovoked assault on sovereignty and the international rules-based order is exactly what this body was created to prevent.

Those who perpetrated these crimes must be held to account. Our message to Russia’s military and political leadership is this: the world is watching you, and you will be held accountable.

The United States is working with our allies to support a broad range of international investigations into atrocities in Ukraine.

The European Democratic Resilience Initiative, which President Biden announced in March, will provide up to $320 million in new funding to support societal resilience and defend human rights in Ukraine, with a particular focus on accountability for war crimes and other atrocities committed by Russia’s forces in Ukraine.

As part of this initiative, we have created a new Conflict Observatory, to provide a platform to document, verify, and disseminate open-source evidence of Russia’s human rights abuses and war crimes. This information will be collected and preserved consistent with international legal standards for use in ongoing and future accountability efforts, including potential civil and criminal legal processes.

This evidence database will be available to others engaged in documentation efforts as well as to domestic and international justice mechanisms for their use in making data-based decisions and determinations in pursuit of justice and accountability.

In addition, on May 25, the United States, in partnership with the UK and EU, announced the Atrocity Crimes Advisory Group to ensure efficient coordination of support for accountability efforts in Ukraine. It is a demonstration of international support and solidarity at this crucial historical moment for Ukraine.

As Secretary Blinken said, “The initiative will directly support efforts by the Ukrainian Office of the Prosecutor General to document, preserve, and analyze evidence of war crimes and other atrocities committed by members of Russia’s forces in Ukraine, with a view toward criminal prosecutions.”

We are also supporting a broad range of international investigations into atrocities in Ukraine. These investigations include those conducted by the International Criminal Court, the United Nations, and the Organization for Security and Cooperation in Europe. This includes supporting the establishment of the Human Rights Council’s Commission of Inquiry, and we look forward to hearing more from High Commissioner Bachelet about its work.

We know too that while the war in Ukraine rages, other atrocities have been — and still are — being perpetrated around the world, including in Syria, the People’s Republic of China, Burma, Ethiopia, and Afghanistan. We must not lose sight of them or their victims and survivors.

The United States is supporting investigative mechanisms such as the Independent Investigative Mechanism for Myanmar, to which we provided a new $1 million donation, as well as support to the Sri Lanka Accountability Project.

In addition to our support for many of the International Criminal Court’s open investigations, we are funding capacity building for the hybrid Special Criminal Court in the Central African Republic.

We are also looking for ways to support cases being brought in domestic courts around the world, such as the groundbreaking prosecution of Anwar Raslan in Germany, which resulted in a judgment for crimes against humanity.

Finally, we recognize the contributions of the International Court of Justice to the realization of the purposes and principles of the United Nations.

Given the breadth of work we face, we look forward to today’s discussion to explore ways to develop and strengthen accountability mechanisms at the State, regional, and international levels.

We must also bring necessary focus to victims and survivors. Establishing the truth about international crimes is essential to restoring their rights and dignity, ensuring the same for their relatives, and obtaining remedies for the harm victims and survivors have suffered.

Effective accountability measures for those who are ordering and committing atrocities will make clear that those who engage in brutality will not enjoy impunity. Together with our Allies and partners, we are united in our resolve to bring perpetrators to justice.