Home Home | Search Results | Statement by Ambassador Linda Thomas-Greenfield at the UN Security Council Stakeout Following a Vote on a U.S-Drafted Resolution on the DPRK 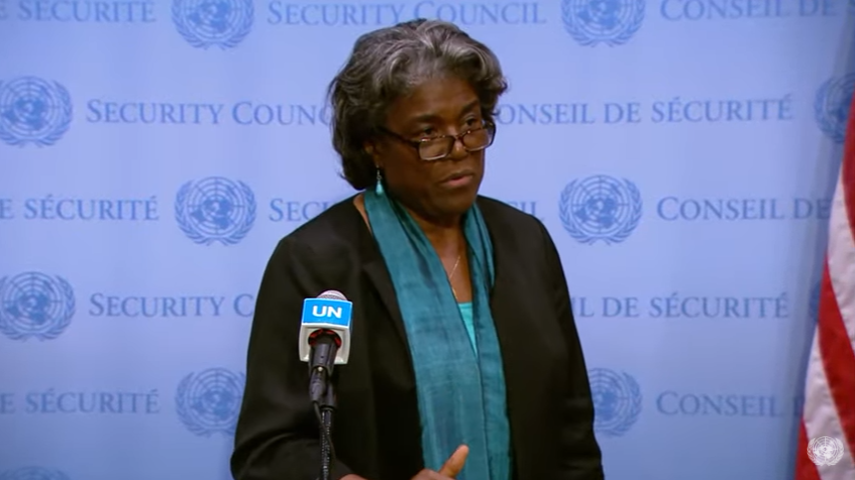 Let me now make a statement solely as the United States.

I am beyond disappointed that the Council has not been able to unify in opposition the DPRK’s unlawful WMD and ballistic missile programs. And that failure rests on China and Russia alone.

Let me start by saying that our commitment to the defense of our allies, Japan, and the Republic of Korea, who were here with me earlier, is ironclad.

President Biden was just in the Republic of Korea and Japan where he consulted closely with President Yoon and Prime Minister Kishida on the challenges posed by the DPRK’s nuclear and missile activities and the importance of working with the international community to make clear that Pyongyang must live up to its responsibilities to the United Nations.

We encourage all Member States to fully implement existing resolutions and will continue to work with our allies and partners to uphold the sanctions on the DPRK.

As Secretary Blinken said this morning, coming off the President’s trip to the Asia-Pacific region, “it’s in all of our interests to uphold the rules, norms, and treaties that have reduced the spread of weapons of mass destruction.”

We will continue to seek unity and compromise here at the United Nations in response to the DPRK’s unlawful WMD and ballistic missile advancements. And in the absence of such unity, we will also continue to consider unilateral actions, and those coordinated with our close allies and partners, including sanctions.

The United States will not stand down as long as Kim Jung-Un continues his unlawful WMD and ballistic missile program and seeks to threaten regional and global security with more destabilizing ballistic missile launches.

We have consistently made clear that we seek serious and sustained diplomacy with the DPRK, but Kim Jong Un has refused to engage. We will continue to make such calls for the DPRK to engage with us diplomatically. At the same time, we will not hesitate to take further actions that are in the interest of our security and in the interest of our closest allies around the world.

AMBASSADOR THOMAS-GREENFIELD: You know, I – my concern is the DPRK has been emboldened by the Security Council’s silence. Twenty-three tests since the beginning of the year. We have been silent, and that certainly has not stopped the DPRK from more tests, and we expect more. So the veto lets the world know who their supporters are, who has blocked the Security Council from taking actions before, but the DPRK has not responded to our silence.