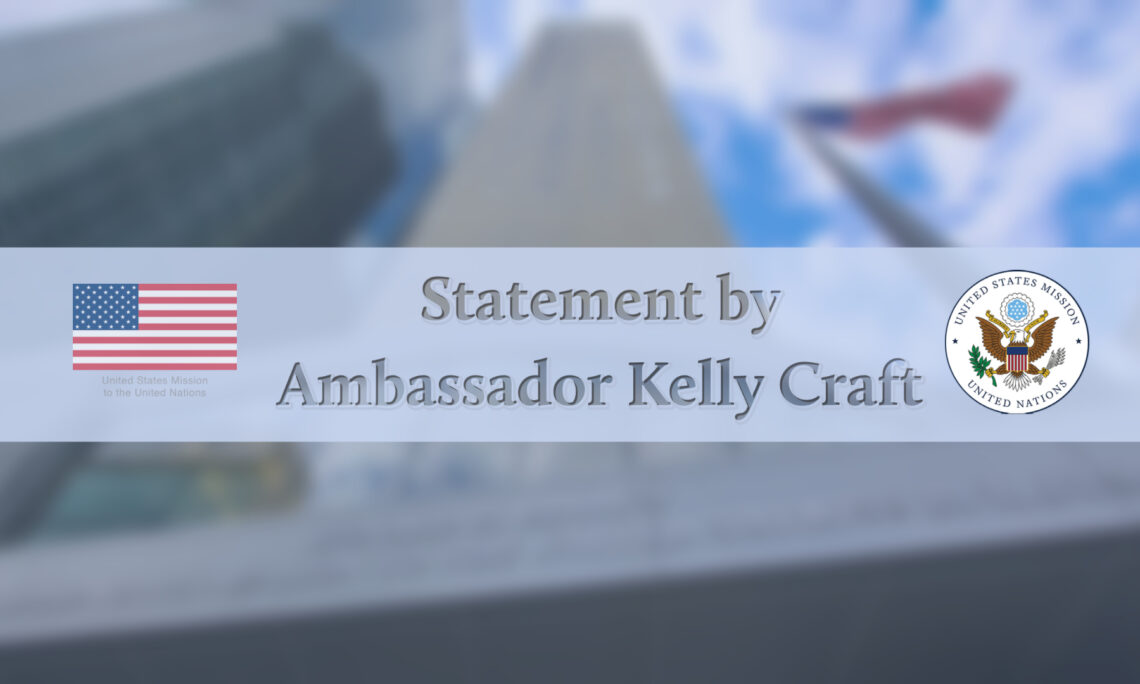 Today we gather in the midst of sacred holiday seasons. It is the fourth day of Hanukkah, the third week of Advent – its Nativity Fast. Each of these faith traditions, and the many others, in their own way remind us of the universality of the human condition and the fundamental connection with each other. That is why this is a perfect time to gather to talk about human rights. I would like to share some thoughts illuminated by my experiences as the U.S.-UN ambassador.

Earlier this year, Brett and Danielle published a thoughtful paper on the urgent need for reform at the Human Rights Council in order to earn U.S. re-engagement. And their recommendations came to life for me as I recalled a number of heart-wrenching interactions I have had in the past year and a half.

While at the Syrian border, there was a man pleading for my attention. The security detail was quite worried he was a threat. But in listening to his message through the interpreter, we came to understand that his message was actually an urgent plea. It was a plea from a refugee, a plea from a father, a plea just pleading for his family, for the family’s future in such a profound way.

I recall my visit to Malakal, a town in South Sudan. There I met with a group of women from several different tribes. Many had walked hours just to be heard. Widows taking care of orphans in their war-torn villages. Through tears, anguish, and discomfort, they trusted me with their innermost, humiliating truth: that their bodies had been used and abused as a commodity by the warring factions – a transient stop for the different militias traveling across the country.

During my time in Colombia, I learned of a young pregnant woman who walked all the way from her home in Venezuela in order to receive proper prenatal care and protect her unborn child, after the Maduro regime had destroyed the Venezuelan healthcare system. In Bogota, I met a young Venezuelan man who was deaf and walked for days to fill out a simple application at a hamburger joint. Through sign language and an interpreter, he explained how the Maduro regime had destroyed his beloved country.

And then there are the millions of Iranians suffering under the oppressive regime. Over the last several months, a journalist, a wrestler, and thousands of protestors were killed or imprisoned because they want a government that represents their dreams and ambitions. A government that turns away from terrorism and sowing chaos in the world.

And I’ll never forget meeting with the families of those wrongfully detained in Iran. Two of the American hostage Bob Levinson’s, his two children, joined us in a very cramped hotel room. I just want to set the scene. It was a very cramped hotel room with families, loved ones, of those who were wrongfully detained in Iran. All they wanted was just a glimpse of hope. And what brought them together was they are all members of the same club, and that’s a club that none of us would ever seek to belong.

This was one of my very first meetings, just three days into my posting as the U.S.-UN Ambassador. From that moment on, these families made an indelible mark on my soul. And sadly, I know that their profound sadness is shared by thousands of Iranian families, who, too, wonder about the fate of their loved ones.

Contrast if you will, these moments, with the Universal Declaration of Human Rights, which calls for “the advent of a world in which human beings shall enjoy freedom of speech and belief and freedom from fear, and what has been proclaimed as the highest aspiration of the common people.”

Sadly, the UN’s organization charged with the protection and promotion of human rights, the Human Rights Council, includes the voices of the very human rights violators it was designed to counter.

The Bush Administration correctly predicted in 2006 that the newly formed Council would face the same problems that plagued the defunct Commission on Human Rights. The Obama Administration tried hard to reform the Council from within, but unfortunately, that didn’t work.

From the first day, President Donald Trump worked hard to try and address the Council’s problems, but when nothing changed, we made the principled decision to withdraw. The Human Rights Council has given us no reason to reconsider our decision. In its current composition and direction, the Council is failing to live up to its name. It is an insult to the millions around the world who are subjected to oppression and persecution for seeking to employ their God-given rights. It is an affront to human rights defenders craving support from the United Nations.

Let us call for a reform process to address the Council’s flaws, shaped by three core objectives: stricter membership criteria; improved elections; and elimination of bias.

Among the 15 members elected to the Human Rights Council in October was China. One needs to look no further than China for egregious examples of human rights abuses. And the outrage stands in stark contrast to Taiwan, a true force for good in the world. You don’t need to take my word for it, or even the distinguished scholars at AEI and Heritage. Look at the ground-breaking report of the New York Times. And you know when AEI, Heritage, and the Times agree on something – you know it must be serious.

The haunting lede: “The students booked their tickets home at the end of the semester, hoping for a relaxing break after exams and a summer of happy reunions with family in China’s far west. Instead, they would soon be told that their parents were gone, relatives had vanished and neighbors were missing – all of them locked up in an expanding network of detention camps built to hold Muslim ethnic minorities.”

There must be means of denying such countries membership unless their human rights practices improve.

For example, any member state currently under investigation or sanction by bodies like the Security Council, International Labor Organization, or Human Rights Council could be prevented from running for Council seats. This would have prevented the sickening scenario that happened last year, when Venezuela was elected to the Council after a mere month that the Council had agreed to a Fact-Finding Mission on human rights abuses in Venezuela. To think about this just makes me sick, as I held the hands of the Venezuelans on the border in Colombia who had fled to escape the Maduro regime’s abuses.

Another option is for the General Assembly or even the Security Council to update and maintain their own ineligibility lists. We know that human rights abuses and threats to international peace and security often go hand in hand.

Current voluntary hearings run by a consortium of NGOs have been a positive step, and we should build on this tool. Thorough public examination of human rights records go some distance toward discouraging nations who only want to join the Council so they can suppress such an examination.

Second, elections for seats on the Council must be credible and they must be competitive. Far too often, regional slates are uncontested, and backroom dealing determines which countries end up on regional ballots.

Options to improve this situation include requiring slates to feature more candidates than open seats or providing a “none of the above” option that results in new candidates being proposed if it is selected. In the most recent election held in October, only one regional slate was contested – that’s no election at all.

Another idea to consider would be to increase the threshold for election from an absolute majority to a two-thirds majority – this would make it harder for human rights abusers to win seats on the Council.

Third, we must deal with the insanity at the center of the Human Rights Council – persistent and egregious anti-Israel bias. Israel is the only country singled out by the Council for scrutiny under what is known as Agenda Item 7.

No other country is targeted in this way. Not the murderous Assad regime in Syria, not the disastrous Maduro regime in Venezuela, and not the Chinese Communist Party responsible for abuses. Not Russia, Cuba, or North Korea. Yes, Israel. Only Israel.

Again, agenda Item 7 has a single purpose – to provide a platform for nations to target Israel. It does nothing to advance dialogue, human rights, or the cause of peace, and it must go.

Many of you are thinking: why now?

Well, especially because this is a season of light. Responsible nations of this world must come together to fix, at long last, the UN Human Rights Council. Because any further delay betrays the victims of torture in Venezuela and the more than one million religious minorities facing detention in China who have the bitter irony of watching the government who abused them sit on the Human Rights Council. Because I cannot turn away from the people in Venezuela, Syria, and South Sudan. Those very people that I met. And I cannot turn away from the mistreatment of the Taiwanese, the Hong Kongers, the Tibetans, the Uighurs, the Rohingyas, and many, many more.

I am not here to dictate a singular approach, as much as I am here to say that the time is now, and the United States should leverage its current position outside the Council to lead the charge for reform before we consider re-joining. And I will work tirelessly with my successor to help in any way possible to uphold our shared values.

To honor the memory of those murdered by abusive regimes and to provide hope to those right now suffering, the United States demands an effective Human Rights Council that lives up to its name.

Tonight, our Jewish brethren will light a candle on the menorah. In doing so, they pay tribute to their ancestors who overthrew tyranny and overcame persecution, around 170 B.C. So, let us, millennia later, all light candles in our own way, knowing that the desire for an end to human rights abuses and “Peace on Earth” is within us all. And let us resolve to rebuild the institutions of government that can restore the fundamental tenants of our common humanity so that every one of us may enjoy the full potential of peace and security in this world.